A friend in Winnipeg is as gifted a punster as I’ve ever known. I guess that’s what happens when you teach middle school for a couple decades. Shortly after the Seahawks loss he wrote:

“Ah, the Seahawks! If one is going win at Lambeau, one has to be tougher than Rambo. Yes, Seattle did Russell up some points in the 2nd Half, But the Packers converted some Big 3rd Downs at the end, by Aaroning it out. It was a Gutsy Performance by both teams.”

It’s really too bad no one asked me for advice with 3:30 left. You can’t punt there because Rogers was routinely finding seams in the secondary.

I liked the decision to go for two and the standard second half rally. Wilson is special, when he’s done, we may never see the likes of him again in the Specific Northwest. Enjoy him while he lasts.

I didn’t like the predictably slow start and the very late drop.

That loss probably came down to the delay of game against San Fransisco which cost home field, and most importantly, a week’s rest.

Oh well, it’s time for basketball, and before we know it spring will be here and “a tradition unlike any other“. 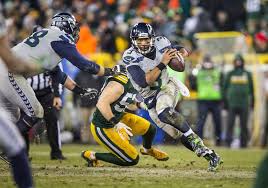