Here’s the “Fitness Friday” dilemma. Of course I love the alliteration, but dislike the five day delay it requires. And yes, I HAVE to start the week with Monday. So I’m planning on posting updates of the previous week on Mondays thus necessitating a name change. If I call it “The Week that Was” can I get half alliteration credit? Twelve day update on Monday.

In the meantime, let me provide a more qualitative update on the September 12th Cutter Battle Royale. Most people mistakenly think the sport of triathlon involves three race segments, but in actually there are six: 1) the swim leg; 2) the swim to bike transition; 3) the bike leg; 4) the bike to run transition; 5) the run leg; and 6) the trash talking.

I’ve been neglecting the sixth segment.

Here’s Lance’s view of me at the finish line.

"Ron, I'm sorry I called you old. Please take your foot off my chest. You da' man."

I’m rounding in to good swimming, cycling, and running shape, but I’m worried about one substantive psychological hurdle. Lance has three of the cutest, nicest kids in todo del mundo and I know he’s going to position them along the last miles of the 35 mile course. It’s one thing to ignore that wimp ass voice that says, “You can’t keep running this fast. Your heart rate is too high. Slow down.” But it’s another thing altogether to ignore this one, “How can you break these kids hearts? How can you knock Lance off the pedestal his kids have him on. You’re the lowest form of life.”

So my mental imaging recently has focused on his son and daughters in tears as I do my Usain Bolt-imitation over the last mile. As a result, I’m slowly getting comfortable with the reality that they will never look at their daddy with the same innocent awe.

Also, since Lance is a trooper, I feel I should make it known that I will be packing heat as well. Here’s my weapon of choice.

When I pass you the picture will be much more blurry

I know what you’re thinking. That bike isn’t set up for triathlon. Where are the aero-bars, the disk wheel, the bling? My admittedly low-tech approach is my way of leveling the field and making the race more fair.

Here are some of my tools of the trade. 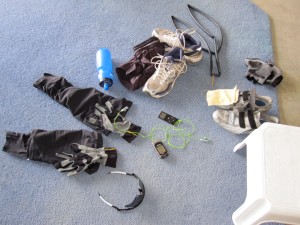 Tools of the trade

If I didn’t have a few syllabi to finish, I’d continue going Gary Payton on Lance, but I don’t want to run the risk of Lance deciding not to show up at the show down.

1 thought on “Whither Fitness Friday?”