In the Steve Ballmer-desk-top computers will continue to thrive v. Steve Jobs-desk-tops will become like a truck that you use sporadically for a few specific tasks, I’m putting ALL my money on Jobs.

And I will be in the vanguard. I have been blown away by my Pad and am frustrated I haven’t had more time to set it up and learn the ins and outs. Two things are conspiring against Pad-time, a heavy June teaching schedule and a light fourteen year old.

Just how great a handheld computer is it? Eventually women will find an alternative word for their feminine product. At the store, “Do you have any pads?” “Wi-fi or 3G?” The first night I went to bed at 10 p.m. and by 6 a.m. the next morning five new apps appeared out of thin air including the bible and an especially riveting one where you poke plastic bubble wrap. The highlight so far has been showing fourteen how to lock it in either horizontal or vertical mode.

Let’s get my least favorite feature out of the way so I can return to positive product pimping. The homepage photograph is a beautiful coastline at dusk with white wisps across the sky, remnants of shooting stars maybe? The problem is they look exactly like ruinous scratches. They still give me heart palpitations six days later. Don’t know that I’ll ever get used to them.

As every other reviewer has explained, typing on the screen keyboard is okay for a few sentences at a time. I bought a separate keyboard and mouse so that I can go long on it. Lack of printing is an issue, but no doubt a temporary one.

Here’s one way it’s changed my life already. Yes, that was tongue in check. My wife is of the anti-television persuasion. I wear the pants in the family nearly all the time (I should confirm that with her), but I have not mustered the courage to defy her “no television in the bedroom” edict. With this bad boy, I mean pad boy, what she doesn’t know won’t hurt her. Case in point, the other night I surreptitiously watched an episode of Scrubs on ABC’s app. I know what you’re thinking. Let’s just say it will be ON if she even suggests a “no Pad in the bedroom” policy.

Admittedly, this may be the most incomplete, least technical, least insightful, least helpful iPad review written to this point. But how many of those other fanboys can do this? 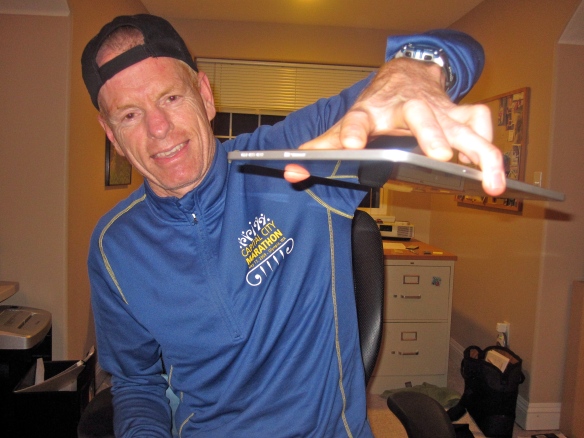