Every seven years or so I like to have a guest post whether readers clamor for it or not. Can you guess the author? Hint: I know her well enough to assume “wiener” was intentional.

Who will get voted off the island next?

Who will have to pack up their knives or pack their bags and go home? Who will get FIRED! These are the questions that draw millions of Americans back to their TV sets week after week engaged in the newest version of their favorite reality TV shows.- The American Presidential Election.

Week after week, we tune in to the latest episode to see who will be voted off the stage next? Will it be Low Energy Jeb? Abrasive Ted? Little Marco? Low Talker Ben? Commie Bernie? Calculated Clinton? Or The Donald? Each episode we meet the remaining candidates still left on the stage. We listen to their stories and then leave them to the voters to see who will survive yet another week. In between episodes there is gossip (Jeb has so little energy and Marco, just so      little!), backstabbing (Ted says Trump has withdrawn!), accusations ( Bernie’s a commie!), drama (is Ted even eligible?- he’s Canadian!), sex appeal (a little short on that, barring Melania Trump) and the sure bet ratings pumper upper –violence, (aka Trump campaign rallies).

CNN is airing a new series called Race For the Whitehouse simultaneously to the real Race For the Whitehouse. But I think they’re wasting their time, because the real deal is proving to be everything the American people could ever ask for in a reality TV show.   And that is a big reason why Donald Trump has been so successful thus far. In the show that has gripped the nation, he is the star. And well qualified as a star as he was also the star of his own reality TV show from 2004-2015- The Apprentice . Donald Trump is an actor, an entertainer. He has seamlessly moved from The Apprentice to The American Presidential Election. He knows how to be in front of a camera, how to work a crowd, how to create drama & suspense, how to gossip , how to FIRE people off the damn stage and of course, his favorite, be the wiener week after week, episode after episode.

Please people, can we just turn the show off, switch the channel or wake up and realize this is not Reality TV, this is Reality? 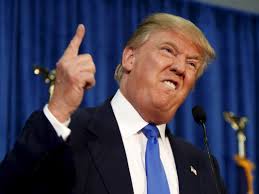