Similarly, as everyone does these days, it’s presumptuous to label “on-line teaching” as teaching. Take Dr. Paige Harden for example: 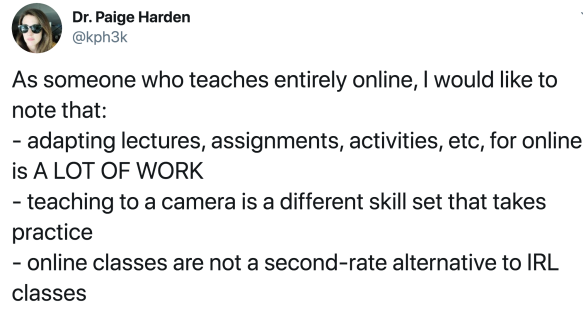 Harden has an informative twitter thread on how to “teach on-line” and you can see her and a colleague in action here:**

Everyone refers to “teaching on-line”, but Harden’s specific phrase “teaching to a camera” highlights the fallacy of the phrase.

You can present to a camera, but you cannot teach to one. “Okay Boomer” alert. . . the word “teaching” should be preserved for IRL settings. The “on-liners” can go as crazy as they want with “presenting”.

Teaching encompasses more layered relationships with students than presenting. Teaching interactions involve direct eye contact, silences, nonverbal communication, occasional emotion, and one-on-one conversations outside of class where each of those are even more integral. Teaching, at least in the humanities and social sciences, entails learning your students’ stories, tweaking your plans according to those stories, and being spontaneous and authentic in ways that are difficult in a separate studio. Teaching is messy for the same reasons all interpersonal relationships are—because everyone enters into the conversation with different worldviews shaped by contrasting gender identities, class backgrounds, ethnic backgrounds, and political beliefs. And then, for good measure, add in status and power imbalances.

Teachers have a more immediate sense of how a course is going than presenters because technology-mediated feedback is harder to interpret. When I lecture in an auditorium, I can assess audience engagement based upon several subtleties including eye contact, head nods, facial expressions, and the number (and quality) of questions asked afterwards. The technologist will argue they can do the same sort of thing on-line, but I’m skeptical because teaching entails a dynamism that I don’t believe exists in on-line presenting. My “in real life” students routinely alter my lectures, discussions, and activities with unpredictable questions, or comments directed to me or their classmates, whose responses cannot be anticipated either. Again, technologist will say their presenting is similarly organic, but again, everything is relative.

So let me correct the record. As the nation’s professors and students turn to cameras, microphones, screens, and keyboards, some truth-in-advertising is in order. The country’s colleges are not moving to on-line teaching, they’re moving to on-line presenting.

*since no one talks on phones anymore, “sexting” is probably a more relevant frame of reference, another modern phenom I know nothing about

**Apple thanks you for the commercial