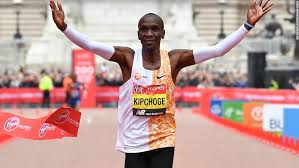 Some tech savvy person in sports television is going to make millions as a result of reading the following few paragraphs. My decision not to apply for the patents myself is just one more example of my amazing selflessness.

Here’s the problem with televised running, swimming, and cycling races. Let’s take running as our primary example, but remember the same phenomenon applies to swimming and cycling.

The camera zooms in on ten East Africans mid-marathon and their 4:45 per mile pace looks almost effortless. What’s needed is some sort of computer generated avatar of a recreational runner superimposed on the same course to begin appreciating how insanely fast the elite runners are going. With smart televisions of the near future, we should be able to program personal avatars, whether we’re watching running, swimming, or cycling. I’d program my runner to hold 8 minute miles; my swimmer, 1:30 per 100 yards; and my cyclist, 20mph. Once programmed, we can sit back and marvel at how quickly and often we get overtaken.

Case in point. Last week a 22-year-old Ethiopian star, Yomif Kejelcha, broke a 22-year-old indoor world record in the mile, running 3:47:01 at a meet in Boston.

When I’m rested and running with purpose I can hold 7:40 miles for an hour or two. If I set my avatar for a 7:35-7:40/mile pace on the same 400 meter track at the same time as Keljecha, in just four laps, he would pass me for the second time just before crossing the finish line. Twice as fast. I’m no burner, but probably less slow than 85-90% of recreational runners.

Long story short, if you watched Kejelcha run four laps in the time it takes me to run two, you’d have a much, much better appreciation for his freakish speed.

From The Guardian. The report is from Oxfam, a British-based charitable organization:

“The growing concentration of the world’s wealth has been highlighted by a report showing that the 26 richest billionaires own as many assets as the 3.8 billion people who make up the poorest half of the planet’s population.”

Oxfam says between 2017 and 2018 a billionaire was created every two days. And then there’s this. Just 1% of Jeff Bezos’s (pre-divorce) fortune is equivalent to the whole health budget for Ethiopia, a country of 105 million people.

1. Everything you think you know about obesity is wrong. So damn substantive, I should probably just stop here. A must read for anyone interested in being a more intelligent, caring human being. Here’s some context:

“About 40 years ago, Americans started getting much larger. According to the Centers for Disease Control and Prevention, nearly 80 percent of adults and about one-third of children now meet the clinical definition of overweight or obese. More Americans live with “extreme obesity“ than with breast cancer, Parkinson’s, Alzheimer’s and HIV put together.

And the medical community’s primary response to this shift has been to blame fat people for being fat. Obesity, we are told, is a personal failing that strains our health care system, shrinks our GDP and saps our military strength. It is also an excuse to bully fat people in one sentence and then inform them in the next that you are doing it for their own good. That’s why the fear of becoming fat, or staying that way, drives Americans to spend more on dieting every year than we spend on video games or movies. Forty-five percent of adults say they’re preoccupied with their weight some or all of the time—an 11-point rise since 1990. Nearly half of 3- to 6- year old girls say they worry about being fat.

The emotional costs are incalculable.”

2. This cult comes highly recommended. I count myself a member. The top reader comments are equally interesting.

3. HOW award—headline of the week. With each tweet, Kavanaugh’s chances lessen. Please keep tweeting.

4. Can Ethiopia’s new leader, a political insider, change it from the inside out? Great opening:

“On the morning of his first day of school, when he was 7, Abiy Ahmed heard his mother whispering into his ears.

‘You’re unique, my son,’ he recalled her saying. ‘You will end up in the palace. So when you go to school, bear in mind that one day you’ll be someone which will serve the nation.’

With that preposterous prophesy for a boy growing up in a house without electricity in a tiny Ethiopian village, she kissed him on his head and sent him on his way.”

“The democratization of professional quality video cameras for filmmaking is one of the great technical achievements of the last two decades. 20 years ago you’d have had to spend thousands of dollars on film to make a short movie that looks this good.”

6. It’s often difficult to pick a major (concentration of study) in college. Here’s a new option that will likely prove popular.

1. How we talk to our kids about race, racism and identity. After the discussion, one of the participants communicated an important insight that is often lost on people who do not have much experience with people different than them.

“This experience concretized a familiar truth: black identity is not a monolith. Our experiences and stories are as vivid, varied, and complex as our culture and hues.”

“When companies get in hot water over bias, their initial reaction is often to do some kind of training because it’s something you can outsource and it’s relatively easy to do and has good optics. The studies that look out six months to a year tend to be equally likely to show increased bias after the training as they are to show decreased bias.”

All is not lost though:

“. . . companies can have better success decreasing bias by making sure their workforces are integrated so that people of different racial groups are regularly in contact with one another. “We know that what works best is for workers to be put side by side with people from other groups and have them work together collaboratively as equals. That seems to be the best way to change stereotypes in people’s heads because it causes people not to lump all members of a group together, but to start to individuate.”

Her logical conclusion is disheartening:

“The current unrest in Ethiopia is not a phase that will fade with the pronouncement of a new prime minister, but rather a reflection of a system in which modest reform and dissent have been made nearly impossible. Until the government remedies the marginalization of ethnic groups and ceases to perpetrate gross human rights abuses, it will experience protests, potentially escalating beyond the low levels of violence that have characterized the clashes between Oromo protesters and the government thus far. Putting a new face to the leadership of this system will not be enough to stabilize the country—radical democratizing reforms are necessary. Failing this, the country (and its hand-wringing security partners) can expect continued resistance and instability.”