“Young people nowadays don’t care much about the privacy.”

2. Care about journalism? Maybe you should cancel your newspaper.

“As long as dead-ender subscribers continue to make Alden’s properties profitable, the company will have little incentive to improve its newspapers. The best that most Alden cities can hope for right now is the sale of their newspapers to local or better owners, as has happened to the Salt Lake Tribune, the Berkshire Eagle, and the New Haven Register.”

3. Best non-fiction books of 2019. I used this list to find my next book on North Korea. Ana Fifield, The Great Successor: The Divinely Perfect Destiny of Brilliant Comrade Kim Jong Un.

4. The lies of (Netflix’s) the Irishman. Long story short, Frank Sheeran (Robert DeNiro) made it all up. Apparently never killed anyone. This isn’t an important/contested chapter of US history, so I don’t care, a great film regardless.

These facial expressions are a little different than those we see among the people positioned behind Trump at his campaign rallies.

They look like they just learned their tour of duties have been extended by an extra Thanksgiving or two.

Navy SEAL accused of the following:

“SEALs from the platoon that Chief Gallagher led during a deployment to Mosul, Iraq, in 2017 told military officials that they saw the chief fatally stab a wounded ISIS captive. Navy investigators said while several SEALs were providing medical aid to the fighter, Chief Gallagher took out a handmade hunting knife and stabbed the captive, a teenager, several times in the neck and torso.

The chief was also accused of firing a sniper rifle at civilians, striking a girl wearing a flower-print hijab as she walked along a riverbank and an old man carrying a water jug. Several SEALs broke the group’s code of silence and testified against Chief Gallagher in a military trial.”

Furthermore, Gallagher threatened to kill any Navy SEALs that reported him.

Navy secretary: “Mr. President, he struck a girl wearing a flower-print hijab as she walked along a riverbank.”

Navy secretary: “Mr. President, he took out a handmade hunting knife and stabbed the captive, a teenager, several times in the neck and torso killing him.”

Navy secretary: “Mr. President, he threatened to kill any SEALs that reported him.”

The fallout from the New York Times:

“The Navy demoted him, but Mr. Trump earlier this month reversed that demotion, angering Navy officials, including the commander of the SEALs, Rear Admiral Collin Green, and Mr. Spencer, the Navy secretary.

In a letter acknowledging his termination on Sunday, Mr. Spencer said that he regarded good order and discipline throughout the Navy’s ranks to be ‘deadly serious business.’

‘The lives of our sailors, Marines and civilian teammates quite literally depend on the professional execution of our many missions, and they also depend on the ongoing faith and support of the people we serve and the allies we serve alongside,’ the letter said.

He added: ‘Unfortunately, it has become apparent that in this respect, I no longer share the same understanding with the commander in chief who appointed me, in regards to the key principle of good order and discipline. I cannot in good conscience obey an order that I believe violates the sacred oath I took.'”

Trump isn’t “pro-military”, he’s anti-human dignity. He’s shown he doesn’t care about the sanctity of human life, let alone “good order and discipline”. The same is true for those blindly following him.

Two summers ago, nine of my closest cycling friends and I were heading out of town on a late afternoon training ride. More specifically, we were heading into the Boulevard/Yelm Hwy circle when it happened.

A renegade knucklehead rider who has since been kicked off the Olympia cycling island yelled at us to “bridge up” or something of the sort. The same guy I once saw nearly kill himself following a high speed, dumbshit, helmetless, curb jump into traffic.

I laughed to myself, going person-by-person in my head, totaling up the probable years and approximate miles represented. Conservatively, I knew each dude and I had at least 100k miles in our legs. A million between us. Pretty crazy, but not to Russ Mantle.

“The former carpenter and joiner has averaged a staggering 14,700 miles every year for the last 68 years, having first started cycling in 1951.”

[Thanks to a former cyclist of some renown for the tip.]

Moderate Republicans (not sure I should have used the plural) are using an “inappropriate, but not impeachable” line of defense to sleep at night. But what about the True Believers? Here’s how they think: 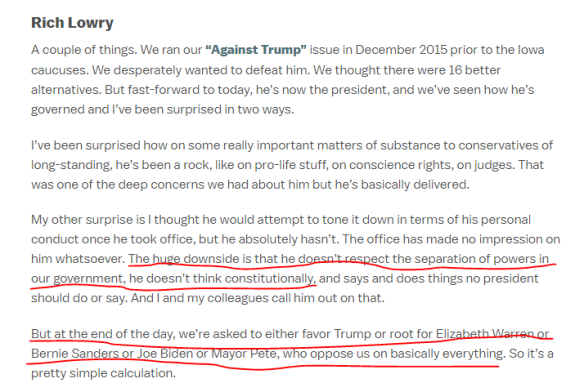 The ends always justify the means.

Because you can only take so much of President Big Stuff, more of the most astute NBA analysis going.

“Morant is real . . . Morant. . . is absolutely electric with the ball. When he gets a head of steam, he can finish right through bigger defenders:The league is awash in water bug point guards who get inside the foul line at will. What separates the greats is the ability to explode through traffic to the rim instead of settling for floaters. Morant has that extra gear.

Morant is shifty in tight spaces. He has a knack for changing speed and direction with an abruptness that confuses defenders. He already is smart about weaponizing his speed as an off-ball cutter.

Teams are going under picks and daring Morant to shoot 3s. He is accepting some of those invitations and is 12-of-29 from deep — great early signs.

Like almost every rookie point guard, Morant has a long way to go on defense. He has the tools and grit to grow into a plus on that end. In his third NBA game, Morant swatted Kyrie Irving’s game-winning attempt at the buzzer and talked all sorts of trash. He looks like a star in every sense.”

And what about De’Aaron Fox?

“I’m a De’Aaron Fox true believer, but Fox’s early-season defense was disappointing: He was flat-footed, upright in his stance, not as engaged as he needed to be.”

Proving no one’s perfect, Lowe shoulda used “is disappointing”, “is flat-footed”, and “he needs to be” since we’re still in the early going.

And on Laker cast off Moe Wagner:

“Wagner might. . . be the leagues’ cheeriest teammate. Basket mics constantly pick him up shouting encouragement at teammates. I would purchase a Moe Wagner Encouragement app that reinforced positive life behaviors: ‘You are killing it on the treadmill, Zach! Great job ordering salad instead of fries! You’re taking a lot of steps today, Zach! Keep it up!'”

Postscript: Richie Z, Guilford College noon ball legend, checks all of Morant’s boxes except the “all sorts of trash”. That can be learned though.

Is the (dis)United States a meritocracy? Reasonable people can disagree, but put Fiona Hill down as a definitive “yes”.

“Years later, I can say with confidence that this country has offered for me opportunities I never would have had in England. I grew up poor with a very distinctive working-class accent. In England in the 1980s and 1990s, this would have impeded my professional advancement. This background has never set me back in America.”

When candidate Trump promised to “drain the swamp” it sent shivers up their collective spine. How would they make ends meet at something less than $1,000/hour? Rumor has it some began playing public golf courses, others went plant-based to save on groceries, still others enrolled in certificate programs at Prince George’s Community College.

But based upon the live blogging of Michael S. Schmidt, a New York Times Washington Correspondent, it looks like D.C. legal beagles are going to be able to hang onto their Georgetown brownstones.

As the hearing slows down a bit, I’ve been doing back-of-the-envelope math on Sondland’s legal fees. He had a nine-hour deposition in October and preparation time for that. He submitted an amended statement two weeks later. Then he had more prep for today’s testimony. It is certainly over $100,000 and likely much much more.

Yakima’s 15 minutes of fame compliments of the New York Times. The sunny place just on the other side of the mountains where I’ve spent some summers teaching.

Except for this sentence, it’s a hopeful story.

“Planes now land almost weekly at the Yakima airport, loading Central American migrants wearing leg shackles and handcuffs to and from buses bound for a federal immigration facility on the other side of the state.”

Dulce Gutiérrez is a great human being whom everyone in the United States should celebrate.