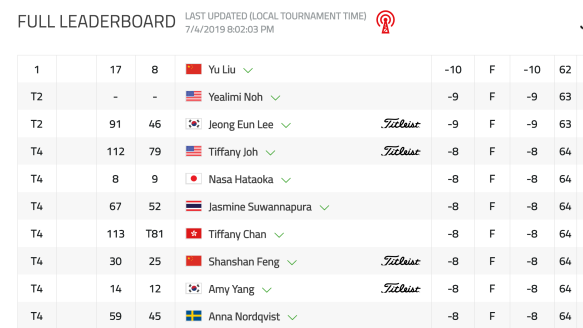 Today’s European Tour leaderboard, only seven countries represented among the top ten because of a run of Brits. Props to Padraig for reppin’ the old guys.

Gotta hand it to the President for at least having a memorable, recurring theme in his State of the Union speech last Tuesday. We can win the future. Among other things, he used the notion of out-competing other nations to inspire young people to choose teaching as their career.

It shouldn’t be surprising that nationalism and zero-sum economic competition inform his administration’s priorities. At the same time, when he took office I held out a glimmer of hope that he would be a different kind of politician, one who would inspire us to make tangible and intangible improvements in ours and other people’s lives.

His emphasis on nationalism is problematic because national identity is both too small and too large an organizing principle.

It’s too small because our well-being is intricately linked with other countries’ well-being including Mexico’s, Canada’s, China’s, and India’s. And it’s too large because teachers-to-be are not inspired by the “global economic race” metaphor. The idea of global competition might inspire people to enlist in the military, but teachers-to-be are motivated by personal, intangible, humanitarian, community-based reasons. They don’t want to beat other nations, they want to make a positive difference in young people’s lives and their small corner of the world.

An emphasis on nationalism and zero-sum economic competition leads to a narrow math and science-based curriculum. We’ll be okay if we just produce more engineers, nevermind the universal questions posed by literature, the insight provide by historical perspective, the creativity engendered by the arts, and the struggles we have living and working peacefully together.

To earn the respect of teachers the President should have said the era of top-down federal government policy making is over. The “Race to the Top” program he described is more of the same with governors bypassing teacher leaders and pressuring school officials to adopt the reforms Arne Duncan has said will be funded. Reforms similar to the ones promoted by the previous administration.

Also, apart from a two-year freeze for federal workers, I was disappointed that the President didn’t call on us to make concrete challenging sacrifices to “win the future”. Absent calls of sacrifice, the good ideas felt disingenuous, especially in the context of the out-of-control deficit. I wish President Obama had tweaked his theme this way. Secure the future—for yourself, your family, your community, and others.

Last week, in a Florida grocery store mother-dear and I were on a mission for some non-frosted shredded wheat. There must have been ten different boxes of shredded wheat, but alas, almost all frosted. Running out of patience, she said, “There should only be two choices of each cereal.” Exaggerating, she added, “We’d all be better off if in life there were only two choices.”

When it comes to political parties, I wish there were three.