Based upon tax case law, estate tax compliance is like speed limit enforcement, 5 miles an hour over the posted limit, troopers look the other way. Similarly, stretch property valuations and annual gift discounts +/- 5 or 10 percent on estate tax returns; no harm, no foul.

How Fred and Donald, and then just Donald, via their estate attorneys, drove 120 miles per hour on streets marked as “40”, year after year, I have no idea. Does the “I” in IRS stand for “Incompetent”?

Something else I have no idea about. How do any honest, hardworking people of modest means, who pay all of their taxes, support this serial short cutter whose actions suggest he doesn’t give a damn about the common good?

“They (father Fred and Donald) were both fluent in the language of half-truths and lies, interviews and records show. They both delighted in transgressing without getting caught. They were both wizards at manipulating the value of their assets, making them appear worth a lot or a little depending on their needs.

Those talents came in handy when Fred Trump Jr. died, on Sept. 26, 1981, at age 42 from complications of alcoholism, leaving a son and a daughter. The executors of his estate were his father and his brother Donald.

Fred Trump Jr.’s largest asset was his stake in seven of the eight buildings his father had transferred to his children. The Trumps would claim that those properties were worth $90.4 million when they finished converting them to cooperatives within a few years of his death. At that value, his stake could have generated an estate tax bill of nearly $10 million.

But the tax return signed by Donald Trump and his father claimed that Fred Trump Jr.’s estate owed just $737,861. This result was achieved by lowballing all seven buildings. Instead of valuing them at $90.4 million, Fred and Donald Trump submitted appraisals putting them at $13.2 million.

Emblematic of their audacity was Park Briar, a 150-unit building in Queens. As it happened, 18 days before Fred Trump Jr.’s death, the Trump siblings had submitted Park Briar’s co-op conversion plan, stating under oath that the building was worth $17.1 million. Yet as Fred Trump Jr.’s executors, Donald Trump and his father claimed on the tax return that Park Briar was worth $2.9 million  when Fred Trump Jr. died.

This fantastical claim — that Park Briar should be taxed as if its value had fallen 83 percent in 18 days — slid past the I.R.S. with barely a protest. An auditor insisted the value should be increased by $100,000, to $3 million.”

Tuesday night, while the Good Wife and I slept, our checking account was ransacked by the Internal Revenue Service. This is where our (personal) record amount of federal taxes will eventually end up. 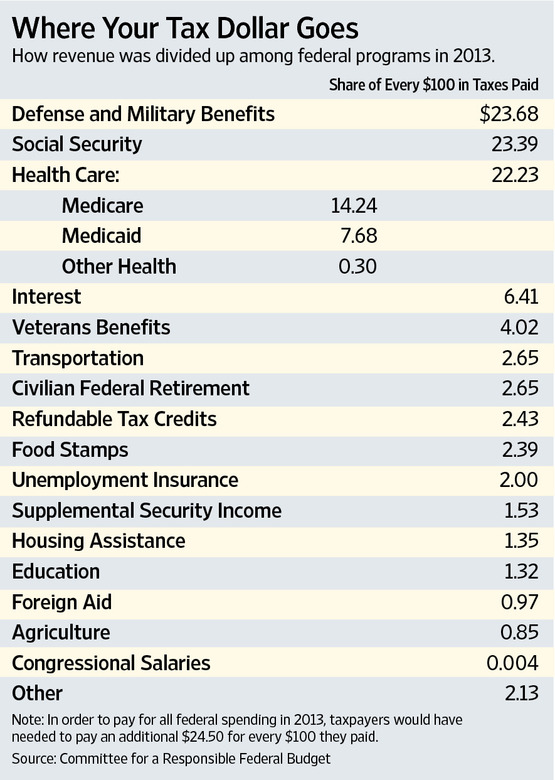 Granted, that’s barely scratching the surface of what’s wrong with the PCS. The main problem with our tax system is once our checking account is raided, we have next to no say over where our federal tax dollars go (apart from voting for two senators and a congressional representative). For example, despite being anti-war educators, 27.7% of our federal taxes go to the military (defense and military benefits + veteran benefits) while 1.32% goes to education. We’re forced to help purchase drones, when we’d much rather help purchase improved teacher salaries.

At the same time, our hawkish neighbors might compensate for our military stinginess by designating far more than their 27.7% for the Pentagon. And of course, our other neighbor, Dan, Dan, The Transportation Man, would significantly increase his 2.65% transportation contribution.

A few significant improvements would result from this experiment in direct financial democracy. 1) Complaining about tax rates would decline. 2A) Government departments and programs would have to explain to the public why they’re deserving of a greater percentage of the total revenue available. And 2B) The more they could demonstrate fiscal responsibility, the more support they’d gain.

Admittedly, these ideas won’t slow the accelerating gap between the Haves and Have Nots. On April 15th, I listened to a panel of tax experts discuss tax reform on the Diane Rehm Show. I was much more intrigued by the tone of the discussion than the details of their ideas. The tone was, “Our tax system is so complex that improving it by simplifying it is impossible, but I’m happy to play along with your national audience anyways.”

As anyone who has tried to improve K-12 schooling, reduce global warming, reduce money’s influence in politics, or eradicate drugs and crime from their community will tell you, those who have a vested interest in the status quo benefit greatly from a sense of overwhelming complexity. Reformers, whether tax or otherwise, can’t wrap their arms around the whole problem, and therefore, don’t know where to begin making changes. Eventually they try piecemeal reforms. Before those reforms take hold, people’s patience runs out. Gradually, everyone and everything reverts back to “normal”. With each passing year or decade, what’s viewed as “normal” becomes more deeply entrenched, making significant change even more difficult.

Tax reformers have lots of good ideas including deductions they’d tweak or eliminate altogether. But they can’t see the forest because of the trees. Their ultimate challenge is to convince the public that simplifying and improving our tax system is possible.