Life not on hold.

Then I watched Youngest watch YouTube content on our new whiz bang television, which I’d never done. So I followed suit and graduated from my desktop computer. It’s transformed my television viewing.

Despite being a technology skeptic who still savors some semblance of privacy, I’m down with YouTube’s algorithm.

For example, remember this description of one of my favorite television shows of all time from almost four years ago? I’m not sure how I’ve lived this long without it. I was equal parts gobsmacked and chuffed to bits when it appeared in my YouTube queue recently. I can’t believe it’s been going strong for the last four dark years, damn the Canadian Broadcasting Channel suits who decided to drop it.

Now I’m binging on it while trying to stay in some sort of cycling shape. Here’s an excellent sampler for your viewing enjoyment.

If that was your cup of tea, brew one more.

Now, if you’ll excuse me, the bike and telly await.

2. Why every cyclist needs a pool noodle.

4. How accurate is HBO’s Chernobyl? Spoilers throughout.

6. High school athletes in California are turning away from football.

Playfulness is a wonderful attribute. One I’d like to revive.

Last Thursday afternoon. Lunch swim workout in the books. Walking across Foss Intramural Field back to the office. One of those perfect, sunny, 60-ish, post summer/pre-fall September days in the Pacific Northwest that you wish you could bottle. Frisbees filled the air.

Somewhere between young adulthood and adulthood I stopped playing frisbee. I used to be a SoCal legend in my own mind. At SoCal beaches my signature move was to huck it way above the waves like a boomerang into the onshore wind and then, , , maybe 15 seconds later, catch it to the delight of , , myself. I don’t think our frisbee even survived the recent move.

Somewhere in adulthood I stopped playing, not just frisbee, everything it seems. Yes, swimming, running, and cycling can be child-like activities, but not the way I tend to do them. I train. I have distance and time goals. And tiny gps-enabled computers and apps that tell me how far, how fast, and many other things in between. Yesterday I ran home from church, 7.5 miles in 56 minutes and change, for a 7:30/m average (first half, downhill). At one point, I saw two good friends walking the opposite direction. We said “hello”, and even though we haven’t talked for a month, I kept going. You know, the average pace and all.

Hell, I don’t even PLAY golf anymore. And I’m not alone. Do any adults ever think “What a nice day, I should ask the rest of the office to chuck the frisbee for awhile.”? And yet, nothing is more natural for young adults on college campuses than to stop and play.

How to cultivate a playful spirit? What might my swimming, running, and cycling look like if I approached them as play? What about other non-work activities?

Before you suggest low hanging fruit like mountain biking, you should know I sometimes struggle staying upright even on intermediate trails. With that caveat, I’m open to any other suggestions.

What do you do, if anything to maintain a sense of playfulness? 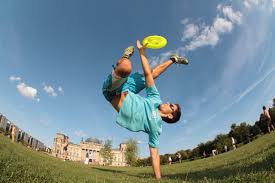 June was productive. I’m fit although I’m swimming, cycling, and running slower than I’d like. Rightly or wrongly I’m chalking that up to the higher than normal volume. When I shut things down for a day or two, I bounce back well. I’m looking forward to the August taper and to returning to more normal, sane levels of activity post-race.

Too soon for a definitive judgement, but right now, I’m even more convinced that repeat Iron-distance competitors have several screws lose. One problem is never feeling as if you’re doing enough. I’m training more than normal, but still often feel it’s not enough. Right now I feel especially badly since today is my second rest day of the week. Of course I nearly killed myself on my mountain bike yesterday, but still.

My suggestion, if you ever suffer the same kind of mental lapse I did and sign up for a similar “race”, is to design a standard week that is realistically repeatable. For the love of alliteration I repeat, realistically repeatable. I’ve had to adjust my original weekly swimming, cycling, and running goals down. I’ve also had to build in a weekly rest day (or two). Getting ready is more about consistency and positive momentum than uber-long workouts that often result in missed workouts.

Rereading that last pgraph makes me chuckle. I sound like I know what I’m doing, but I don’t. These are unchartered waters. I wish I could hit it hard this week, taper for the next three, and race, but most participants probably wish they could just be done with it as this point.

Last week, thanks to some of the more generous friends a guy could have, I once again trained at altitude, even if only 4,000′ plus, in and around Sunriver, Oregon. The week consisted of a mix of Benham Falls trail runs, Mount Bachelor cycling, North pool swimming, and a memorable Sunriver to Bend and back mountain bike ride. Even had great, built-in training partners for most workouts.

That was especially nice when I went over my mountain bike handlebars on the penultimate day. I rode smack dab into an 18″ vertical rock on the side of an easy trail. Total lapse of concentration that I paid dearly for. Quite possibly the world’s worst mountain biker. I thought I had broken my nose and lost a tooth and needed lots of stitches. Fortunately, I was cut up and badly bruised, but avoided the emergency room. Very sore, but I’ll be fine in short order. That sigh of relief is the worldwide triathlon media which is already downbeat with Lance on the sidelines.

Another training tip from the rookie know-it-all—be sure to throw your back out and face plant on your mountain bike at least eight weeks before the start.

In related news, I’m sorry to report elder brother, a 2002 Iron-distance Canada finisher, also known as Wonder Years Wayne, has already launched his psychological attack. I HAVE to beat his time of 11 hours, 44 minutes, and 58 seconds otherwise I may have to re-up and the idea of that isn’t very pleasant right now. He takes great pride in accurately predicting my finishing times. Last week he emailed ludicrous numbers in what was an obvious attempt to get me to swim fast, cycle faster, and then blow up somewhere along Shaka Lake during the run. In a shameless flourish even by his standards, he threw in a Hawaii World Championship reference. Not taking the bait. Wouldn’t be prudent.

Here’s to one more month of going long. One more update pre-race.

Postscript—If you’re interested in either writing and/or the importance of positive thinking in athletic performance dig this recent story.

Bachelor in my sights

Evidence I can ride a bike

To quote my friend, “The rock won.”

Greatest innovation of the 21st century so far? Helmet cams? Where does this rank among all-time cycling shorts?