A blogger I read is asking his readers for questions for an interview he’s going to do for his podcast with David Mark Rubenstein. Here’s the first sentence of Rubenstein’s wikipedia entry.

Anyone with 1,000 or more million dollars is routinely introduced as a billionaire.

Given that bizarre phenomenon, I’m going to stop increasing my wealth when I get to around $950m. I would hate to be reduced down to a “billionaire educator”.

Until then, don’t forget to upgrade your iPhones, iPads, and Apple Watches.

I was trying to teach through my computer during Apple’s new ipadAir and Series 6 Watch event yesterday morning. But it was easy to catch up afterwards given the media’s affinity for AAPL.

How to explain this? I’m a card carrying Apple fanboi, but I’ve passed on the first five watches. Part of the explanation is the Garmin ones I’ve worn instead are so solid. But Garmin aside, I haven’t switched to the Apple Watch for one primary reason—inadequate battery life. Daily charging one more device? No gracias.

Incredibly, not a single media journalist that I’m aware of, not even John Gruber, said anything about the Six’s battery life. The single thing that matters most. Complete crickets.

A steady stream of words on the blood oxygen sensor, the brighter display, the new bands, the price, but not a word on the most important feature. That’s a serious tech journalism fail.

Dear Tim Apple, the sand in my hourglass is shrinking. Hurry up already because there’s no guarantee I’ll make it Watch X.

All you need to know about the changing landscape of journalism is that this blogger’s review runs circles around all of those in the major papers, including the New York Times.

Gruber’s genius is he never wastes words. It’s so lengthy because he has so many insights. The best subsection is the last—Digital Touch, so hang in there. His high school classroom story is Gruber at his very best. Just brilliant.

As an Apple investor I couldn’t be more excited about this launch. It’s going to exceed expectations and make me more than enough $ to buy a third or fourth generation one that’s waterproof. It’s ideally suited for American consumers who are slaves to status anxiety and routinely let wants trump needs. 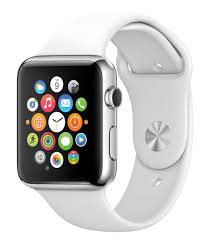 The Apple Watch. My favorite Apple watcher, John Gruber, said this Benjamin Clymer review of the Apple watch is the best one yet. If Gruber says it, it’s true.

Henry Blodget is smart, that’s why his ignorant comments that the Apple Watch is completely irrelevant shocked me. He’s forgotten history, in particular how unenthused nearly everyone was when the iPhone and iPad were first released.

Having said that, I will not be keeping my word because I will not be buying it this go round. I’ll wait a few iterations. I bought a new watch a year ago. My Garmin Forerunner 10 is one of my favorite possessions. It’s a brilliant watch because it only has the most essential functions I need. Meaning it’s simple to use. And it’s waterproof. And, unless I’m using the GPS feature a lot, the charge lasts several days.

The Apple watch isn’t waterproof. Deal breaker. I do not want to take my watch off every time I hit the pool or bathtub. And allegedly, you have to charge it overnight meaning I wouldn’t be able to use it to wake up. My one-third the cost Forerunner 10 has the perfect alarm—not too grating, but loud enough to always do the trick. No doubt Garmin knows what Blodget seemingly doesn’t, the Watch will get much better pretty quickly and prove brutallly tough competition. I may end up being their last customer. Maybe I should buy an extra “10” or two in case they die a sudden death.

Also, most of the Watch apps will require iPhone tethering. Really, I have to carry a new larger iPhone in order to see fitness data on my Watch? A two-part problem. 1) Getting a comfortable enough, water/sweat proof carrying case so that the phone “disappears” while running. Cyclists will most likely use a case and then just toss it in their back-middle jersey pocket. 2) The additional weight. When you pretend you’re an elite athlete, every gram or ounce counts. :)

I had a great run this morning. It was 52 degrees out and it was pitch black when I left, and 10k later, I was bathed in beautiful morning light. I took three things—shoes, socks, shorts.

The only reason to buy the first Watch is to subject acquaintances, friends, and family to status envy. That is always sufficient motivation for lots of people.

The phones. All previous sales records will be shattered. Sleepless nights for Samsung. Their worst fears are being realized as evidenced by this. I’m holding my AAPL shares and should probably use my Watch savings to buy three and a half more.

I THINK I want one. The pretend elite cyclist in me is thinking 4.7″, but the aging reader is thinking 5.5″. Maybe I’ll take a year to decide.

That collective sigh was my friends who have grown weary of my annoying quirk.