Based on a massive new study on America’s health by the Center for Disease Control, the teen birth rate has plummeted in recent decades. Same with teen abortion rates. They’re also drinking less, smoking less, and barely using cocaine. The one thing they’re doing more of. . . exercising.

Despite conventional wisdom, the world is not going to hell in a handbasket.

Great article by Mike Maciag in “Governing the State’s and Localities”. Thanks to “Dan Dan the Transpo Man” for forwarding the link.

In short, cities with more walkers and cyclists are less obese. Key excerpts:

• An estimated 35 percent of U.S. adults are obese, and another third still maintain weights exceeding those deemed healthy. This doesn’t bode well for governments and individuals paying insurance premiums, especially with the country’s aging population.

• Historically, studies have linked trails, sidewalks and bike lanes with an increase in walking or cycling. As medical costs continue to rise and evidence mounts that such infrastructure also improves well-being, more officials might look to give health consideration greater standing in transportation planning.

• While only a fraction of workers in an area may opt to bike or walk to work, having the necessary infrastructure in place compels others to use it more regularly.

• . . . the correlation between commuting and residents not considered obese nor overweight was strong–16 percent greater than the relationship with median household income.

• Those looking to move can use the popular walkscore.com website to measure how accessible an apartment or home’s various neighborhood amenities are on foot.

The problem is we’re not financially savvy enough to tax ourselves—say in terms of raising the federal gas tax by a $1/gallon—in the short-term to fund the necessary walking and cycling infrastructure in the medium-term that would lead to health cost savings in the long-term. Collectively, we’re unwilling to pay a little more for a hybrid when the “buy back” is somewhere down the road.

In our Southeast Olympia corner of the world, the Byrnes family’s walkabililty score is a pathetic 18 out of 100. On the other hand, we’re blessed with wonderful sidewalks and bike lanes almost everywhere. Maybe I should start using them. Maybe I should walk more. Or run. Or cycle. 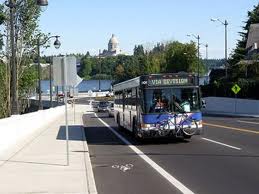 Just one of many nice bike lanes in the State capitol.

Despite the blue, cars still pass cyclists then turn right. Too often, out of sight, out of mind. Ride defensively my friends (said the most interesting man in the world).

All the news isn’t bad. And maybe today’s youth aren’t a lost cause after all.

Sick and tired of big time college and professional sports? Knuckleheads running afoul of the law, the commercialism, the cheating, the excesses of competition. Then take a few minutes and read about how Ohio high school trackster Meghan Vogel (on the right below) recently stopped to help a fallen competitor across the finish line near the very end of the 3,200 meter final.

Maybe it’s an especially touching story because we mistakenly think competition is an elixir for all that ails us. Vogel’s decision highlights the power of cooperation. Her compassion and humble response to her fifteen minutes of fame inspire me. And the surprising decision by the meet officials not to apply the letter of the law and disqualify the two student-athletes warrants praise.

[But of course, all the news isn’t good on the adolescent front.] 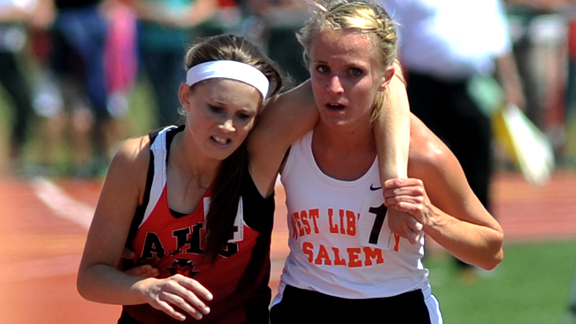 Vogel, “I just did what I knew was right.” Credit: AP Photo/The Daily Call, Mike Ullery