Sustainability is not just a buzzword at our crib.

The Good Wife did a bad thing. She got the trees trimmed. That wasn’t bad. The bad was having the tree trimmers leave a small mountain of tree mulch in the driveway without cluing me in in advance.

It’s all good. I just subbed out a bike ride for a few hours of shoveling and wheelbarrowing. The end result is a very cool environmental win-win. Because the trees were trimmed, our very nice view got even better. Now I can easily see the Pal at Olympia Country Club when he’s sitting poolside with his coastal elite friends.

And instead of buying “beauty bark”, the tree mulch is providing a natural weed suppressant. Like me, it may not be beautiful, but it’s perfectly okay. 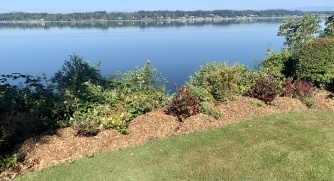 Still need to spread it.

I am fortunate to live in Olympia, Washington in the upper lefthand corner of the (dis)United States. This morning I did one of my fave runs. To Priest Point Park, a loop of the heavily wooded east-side trail, and back, 7.5 miles for those keeping score at home. Now I’m sitting at my desk looking alternatively at my computer monitor and Budd Inlet, the southernmost part of the Puget Sound, a series of saltwater inlets that are, in essence, a bucolic part of the Pacific Ocean.

But did I really run to Priest Point Park and am I really sitting above Budd Inlet? Indigenous groups are succeeding in renaming places based upon their history. Now, Budd Inlet is more appropriately called the Salish Sea and the Olympia City Council is in the process of renaming Priest Point Park, Squaxin Park, after the Squaxin island tribe, who lived here first.

I am down with the updating, but I wonder about a potentially subtle, unconscious even, unintended consequence. What if we think land acknowledgement in the form of updated place names is sufficient and stop short of more substantive changes that would both honor Indigenous people’s history and improve their life prospects?

Of course it doesn’t have to be either/or, it can and should be both/and, but we seem prone to superficial, fleeting acts that are often “virtue signaling“. We change our blog header to Ukraine’s flag, we put “Black Lives Matter” stickers on our cars, and otherwise advertise our politics in myriad ways, but we don’t always persevere. With others. Over time. To create meaningful change.

What is the state of the Black Lives Matter movement? How much attention will the media and public be paying to authoritarianism in Eastern Europe a year or five from now?

Admittedly, that’s a cynical perspective, but I prefer skeptical. I’m skeptical that substituting the Salish Sea for Budd Inlet and Squaxin Park for Priest Point Park will do anything to protect salmon, extend educational opportunities for Indigenous young people, educate people about our Indigenous roots, or improve Indigenous people’s lives in the Pacific Northwest more generally.

In fact, I wonder if it may, in an unfortunate paradoxical way confound those things. I hope not.

When his friends rip him for what they perceive to be an unusually lax job, an egghead professor friend of mine likes to joke that “The life of the mind is 24/7.”

A very successful writing friend of mine once told me that “if you don’t think about your current writing project when you first wake up, something’s wrong.” I’m fascinated by the subconscious which I think of as the nearly continuous internal dialogue I have with myself.

Sometimes I can write a medium-long, (hopefully) substantive blog post in 20 minutes only because subconsciously, I’ve been sporadically working on it for days in my mind. Sometimes even, while asleep.

In one first year writing conference a student of mine described her pre-writing process on one paper this way, “I talked about the prompt a lot while driving around with my friends and then my dad and I really got into it.” For which she received historic levels of extra credit.

Of what does your internal dialogue consist? Are there patterns or themes? What shapes your subconscious? For me, it’s a combination of things I read, watch, and listen to; reflections on interactions with people past and present; and then staring at the Cooper Point coastline of the Salish Sea while nursing my morning latte.

If your subconscious has atrophied as a result of not exercising it enough, maybe you should give this a go.

The chocolate covered raisins in the pantry have melted together. And after this morning’s 5-miler, I looked like I used to after playing summer pickup basketball in super muggy North Carolina gyms.

Then again, it’s not West Africa hot because there isn’t the humidity.

The Salish Sea has felt like a bath the last two nights, excepts for some cold pockets.

Maybe there is something to this climate change science. Another 12-14 hours to go.

Early one morning last week I cycled indoors because Blanca is injured.* Afterwards I plopped into my desk chair to swat back the day’s first wave of emails. All while looking at the Salish Sea.

A rowing scull suddenly materialized. The solo rower probably launched from OAR’s (Olympia Area Rowing) downtown marina dock. With steady strong strokes, they disappeared as quickly as they appeared. Then, five minutes later, after reaching their appointed turn around, they shot by again heading south back to the dock no doubt.

I thought about the probable outline of the rower’s morning—waking early, driving to the marina, lifting the boat from its rack, being on the water at dawn, and rowing a long ways on beautiful glassy water with real purpose. And as required for all Pacific Northwesterners, stopping for the daily latte on the way home.

Then I thought about the rest of the rower’s day and despite everything—the ‘rona, the impending forest fire smoke, the faux electronic schooling, the negative national politics—I bet they had at least a decent, if not good, if not great day. How could they not with that kind of start?

Be the rower. Wake up early. And move. Outside**. Walk, bike, swim, run, paddle, row, skate. With someone or alone. Add some caffeine. Then try to have a bad day. I dare you.

**once the fire smoke apocalypse is over

Intrepid seagulls and cormorants aside, I will not be swimming today. 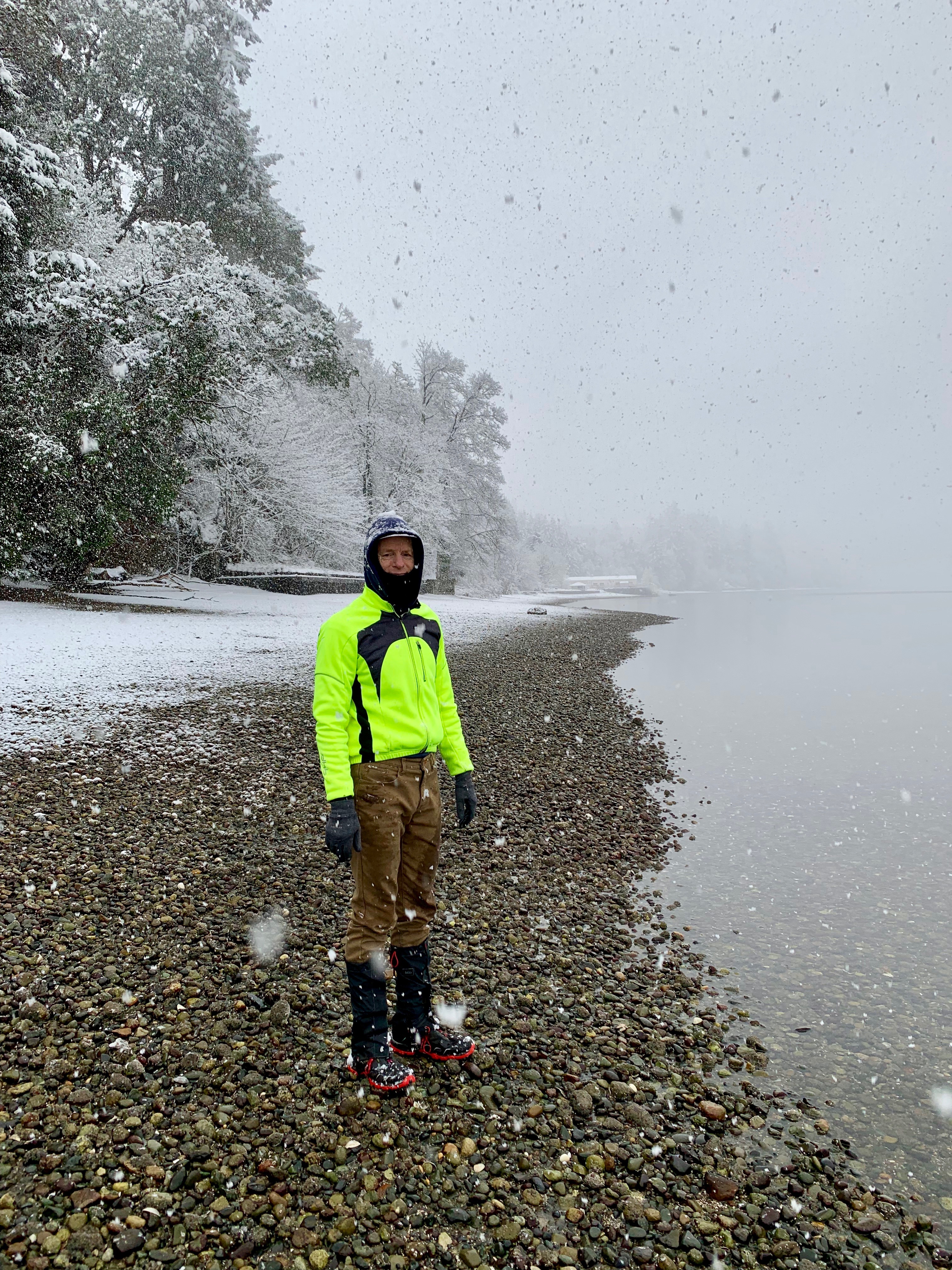 Moving from the burbs to the rural coast was my idea. The Good Wife was perfectly content in our old crib. I promised to reassess in two years, now six months and counting.

To her credit, she’s giving our new location an honest effort. She’s met way more neighbors than me; she picks free-range fruit; she’s turned into a kayaker extraordinaire; and today, she went Next Level.

A neighbor-friend swam across our Budd Inlet (and back) a couple of years ago with his cousin. Then he repeated the feat a month ago with his daughter. That second crossing was all the inspiration the Gal Pal needed. She started talking about her attempt, but I have to confess, it didn’t totally register until a few days ago. Selflessly, neighbor-friend volunteered to swim with her and his wife and son signed on to escort the two of them in double kayaks.

At the last minute, even though I’m not in great swim shape, I decided to join in the fun. So Sunday morning at 9:19a I took off for the Cooper Point bluff following the lead of my intrepid kayak escort famous on Instagram as “Smoothie Girl”. I thought the 1.5 mile crossing would take me somewhere between 40-45 minutes.

At 100m I thought it was too damn cold for 90 minutes, but I acclimated quickly afterwards, and despite some cold pockets, the temp wasn’t an issue. The conditions, as you can see below, were perfect. Apart from a few boat wakes, the water was so still it was like swimming in our small, protected, go-to lake. Not so perfect was the gradual breakdown of my already sorry stroke; swimming over two giant jellies about 10-15′ below me; and some rando vegetation. The rookie that I am, I also thought a harmless seagull was going to dive bomb me.

I broke my cadence a lot because it took Smoothie Girl and me awhile to sync up. Note to self, build in a simulation swim or two. Forty-eight minutes later, I touched down on the Cooper Point shore. A few minutes after that I reversed course, telling SG, “I think I can make it back.”

The highlight of the return was crossing up with the Good Wife. I never thought we’d kiss in the middle of the Salish Sea. SG ripped me for not sighting better, but I told her it was up to her to sheepdog me, at which point, things improved. I tried to settle into a rhythm. The sun came out which made the view of the Capital Building six miles away even more scenic. I started counting breaths to 100, over and over. Touched terra firma in 1:41, quite a bit slower than guessed.

Way more impressive than my feat was the Gal Pal’s. Without her initiative I never would’ve spent Sunday morning in the middle of the Salish. It’s a tough physical feat and she nailed it, commenting more on how beautiful it was than how tough. Like fine wine, she’s coming into her own as a hiker, errand running cyclist, Gull Harbor kayaker, and open water swimmer.

Thanks to TM, AL, and CM, and SG, for the escorting and the Good Wife for living life to the fullest all Sunday morning.