A week ago, ProPublica, an independent, non-profit newsroom that produces investigative journalism in the public interest showed how the wealthiest Americans pay little in income tax compared to their wealth in “The Secret IRS Files: Trove of Never-Before-Seen Records Reveal How the Wealthiest Avoid Income Tax”.

Pro big business libertarians were outraged at ProPublica’s decision to release private tax information of people who, in their view, have contributed disproportionately to the public good.

The extremely well written report left many others shocked by the findings and gleeful that the billionaire class was exposed.

Long story short, most Americans pay 14% of their income in taxes, billionaires pay 3+% on average. That’s because we tax income and not wealth and billionaire’s wealth grows much, much faster than their income.

Everyone concedes that the highlighted billionaires haven’t done anything illegal, which leaves many wanting to make our tax system much more progressive.

• How to teach personal finance.

• The power of the pen. The bin Laden papers were going to be released independent of Hersh’s London Review story of ObL’s death. And Hilary Clinton really wants all her emails made public. And Tom Brady’s never done anything wrong. The Obama administration says Hersh’s story is “filled with inaccuracies”. Which is a lot different than saying it’s untrue.

• Best sports presser of the week.

• Warren Buffet, minimalist. “Money has no utility to me anymore as I am very happy with what I have but it has enormous utility to others in the world. More possessions to me would actually be a liability more than an asset.”

• The data was faked. 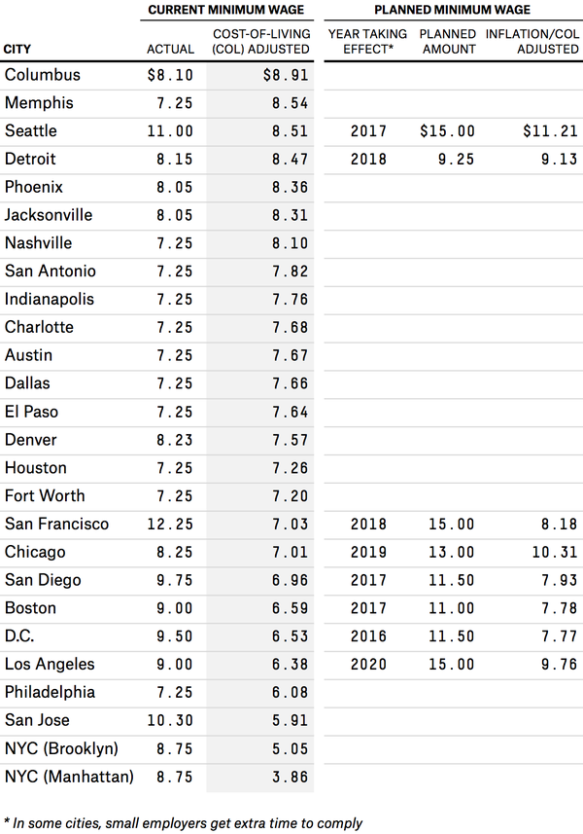 For when you’re done with your spring cleaning.

1) Teaching Tolerance—How white parents should talk to their kids about race. A must read if your goal is to be “color blind” and raise “color blind” children. I started out skeptical thinking adult behavior easily trumps parent “talk”. But Wenner Moyer makes a convincing case for both.

My “kids and race” story from my junior year of college. I was a teaching assistant in a culturally diverse 3rd grade magnet school classroom in West Los Angeles. One day I was sitting at a round table helping five or six students write stories. One light skinned African-American girl began to rub my pinkish, freckled forearm with her hand. Thinking deeply, she finally blurted out, “You have salami skin!” Feeling a need to return serve, I replied, “Well, you have chocolate skin.” To which another darker skinned girl said, “Huh uh, she has carmel skin, I have chocolate skin!”

2. The Oracle of Omaha, Lately Looking a Bit Ordinary. Can we finally wrap up the active versus passive investing debate and move on to more pressing issues like who will replace David Letterman next year? Even Warren Buffet says Vanguard Index funds are the single best way to invest one’s money.

3. Her First, and Last, Book. Graduation season is around the corner. This is a grad story to remember. “I cry because everything is so beautiful and so short.” Paragraph to ponder:

After the crash, Marina’s parents immediately forgave and comforted her boyfriend, who faced criminal charges in her death. They asked that he not be prosecuted for vehicular homicide — for that, they said, would have broken their daughter’s heart. Charges were dropped, and the boyfriend sat by her parents at the memorial service.

Tweet of the month. “Of course I’d be willing to let the Postal Service continue to dope if it would speed up mail delivery.” Nikolas Kristof

Unanswered question of the month. Did Beyonce lip sync her National Anthem performance?

Sports loose-end of the month. The likelihood that the Sacramento Kings will move 619 miles north before the start of next season.

Best basketball quote of the month. “If you have to bounce the ball three times and flip it and twist your arm before a free-throw, it probably means you can’t shoot ’em. Wynton Marsalis’ youth basketball coach.

Multibillionaire quote of the month. “I like today what I liked fifty years ago. . . I was happy when I was in my twenties, and I don’t see a reason to change things.” Warren Buffet

Parenting essay of the month. Coming Home: Returning to parenting after 16 months on the campaign trail. John Dickerson, Slate Magazine.

Book release of the month. Going Clear: Scientology, Hollywood, and the Prison of Belief by Lawrence Wright

Word of the month. Tradecraft.

Insight of the month. Michael Apted, documentary filmmaker on 56 Up. “That was a very important lesson I learned throughout the decades on the film, that I can’t project my version of happiness or success or ambition onto other people.”

Unappreciated health danger of the month.