I enjoy watching Lionel Sanders triathlon training videos on YouTube. I dig his honesty and no-nonsense competitiveness. He said something in a recent one that was particularly insightful. Tying his shoes before a track workout, he said, “If you’re not looking forward to it (meaning workouts generally), you’re doing it wrong.”

Great advice for any walker, hiker, tennis player, yoga aficionado, swimmer, cyclist, runner. Whether you’re looking forward to your activity is a great litmus test of whether you’re overtrained or just going through the motions out of habit. What would it be like to be fully present and genuinely appreciative each time you lace em’ up?

Last night, before expiring, my final thought was, “I’m fortunate I get to swim tomorrow morning.”

This Tuesday afternoon I found myself shoulder-to-shoulder with Brett near the very end of the “Mostly Retired Lunch Hour” ride. Brett is the Presiding Judge at our County’s Courthouse and one of two regulars on the ride still working full-time (I’m half-time). In his mid-60’s, I asked him if he has an “end-date” in mind. He said he’s up for re-election in a year and a half and he’ll have another four-year term. Groovy confidence, but what I most digged was how much he enjoys his work. I told him it was really refreshing to hear since it seems to me that 8 to 9 out of every 10 of my peers are counting down the days until they can stop working.

Brett talked about the Court’s ‘rona inspired virtual proceedings and how engaging the associated intellectual challenges were. And about how much he enjoys working with young attorneys and other people. And about how no one will give a damn about what he thinks as soon as he unplugs. Irrespective of his age and all his peers exiting the stage, he looks forward to what the next several years of work will bring.

He also acknowledged that “we live in a beautiful spot” and that he can enjoy playing outdoors when not working. Because of that, he said he doesn’t feel compelled to move anywhere.

As we approached his Courthouse’s start and end point, he said to me, “It was great riding with you again Professor. It was nice to have a little infusion of intellect.” I think he emphasized little, but still, I’m concerned his judgement may be lacking.

1. Hiking Is an Ideal Structure for Friendship. Love stories like this.

“As soon as we complete one hike, we immediately establish when the next will be. We rotate the organization and planning duties, eeny-meeny-miny-moe style.

That person has complete authority and responsibility to organize the hike, select the location, provide the beer and other refreshments, and make any other side-trip plans. We’ve done breakfast, dinner. We sometimes hit various local watering holes, or we just plop down with a cooler in the woods somewhere. The organizer is responsible for setting up all the logistics, soup to nuts, and is not questioned on the decisions made.”

2. This game has surpassed League of Legends, Fortnite and Valorant as the most-watched gaming category.

3. 2021’s Best States to Retire. I know, I know, how can any state known for the blog ‘PressingPause’ be ranked 31st? Spurious methods.

4. Inside a Battle Over Race, Class and Power at Smith College. Don’t know where to start on this one.

5. Mean tweets may take down Biden nominee. If only Neera Tanden had shown the same tact and diplomacy as The Former Guy. Has nothing to do with “civility” and everything to do with political power. It’s a tad bit ironic that the R’s are channeling Malcolm X. “By whatever means necessary.” (credit: DDTM)

6. The most important Western artist of the second half of the twentieth century. (credit: Tyler Cowen)

Americans exercised more in 2020, according to data tracking service, Strava.

“In addition to jumps in running and cycling activity in the U.S., Strava also saw booms in walking, hiking, indoor cross-training activities such as yoga and weight lifting, and water sports like kayaking and stand-up paddleboarding.

‘There was just so much uncertainty surrounding COVID […] it was great to see people deal with that by finding some sort of certainty and an everyday routine,’ Megan Roche, an ultra-runner and epidemiologist, told ESPN.

Women drove the increase in fitness — both in the U.S. and all over the world. Between April and September, women aged 18-29 saw a 45.2% increase in the median number of activities uploaded compared to a 27.3% increase by their male counterparts, the Strava data shows. Women were also biking more, logging a 72% increase in bike trips compared to 2019.”

Case in point, none other than one of my twenty-something daughters. Summer spent lake swimming. Migrated to the pool in the fall. Cycled with friends in the summer. All the while, she turned into a certifiable WALKING machine. 120 miles in November.

Never disappoints. Anniversary hike two and half weeks later. Procrastinating meant the daughts could join us. Wonderland Trail to just beyond Summerland campground. Panhandle Gap proper will have to wait. 8-9 miles of unadulterated fun. All is okay with the world. For now.

A few friends and I heeded John Muir’s advice this weekend.

Saturday we wondered for a wee bit on the Wonderland Trail where it intersects with the White River. Sunday we went long, looping the Burroughs Mountain Trail from Sunrise. If you’ve never done it, add it to your list. I felt very fortunate to live where we do. And to be alive.

Bonus picture from the niece’s July wedding in Colorado. Taken by Jeanette Byrnes of Jeanette Byrnes photography fame. If you’re looking for a photog, better hire her before she gets too expensive. 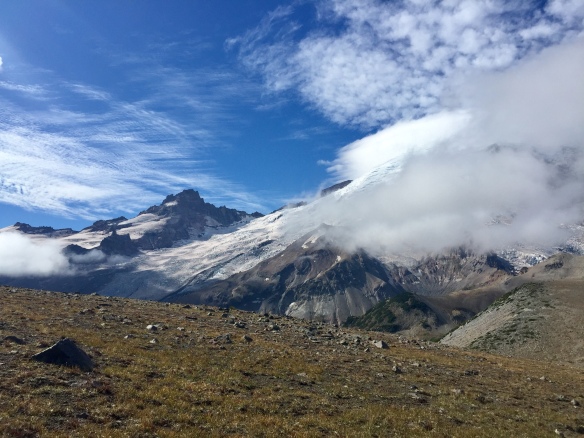 Meandering meadow which may be snow covered by now 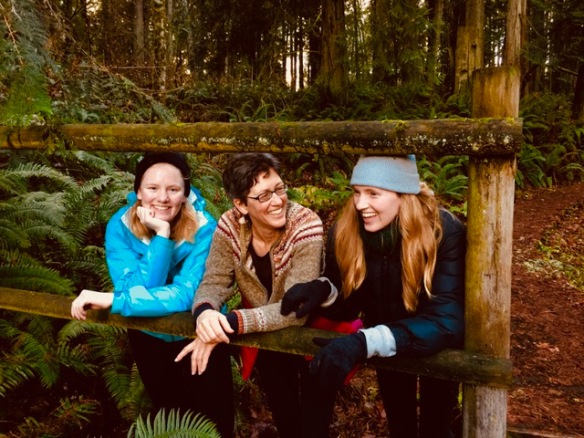 Living in the Upper Lefthand Corner of the United States requires a tradeoff that is difficult at times. You must endure dampness and darkness for eight months of the year in exchange for four months of supernatural light and unparalleled beauty. Right now we’re in the sweet spot of the four months meaning there’s no other place on the planet I’d rather be.

During this morning’s run in Priest Point Park I was intermittently blanketed by the sun’s brilliant radiance as I moved steadily through the forest. Shirtless and sweaty at 7a,  I was profoundly appreciative of July. More so than I ever would be if it wasn’t for the damp and dark runs during the eight contrasting months. The contrast is key.

Mid-day, on Mount Rainier with family, the sun ricocheted off the snow surrounding Snow Lake.

Tonight, transfixed by the fading sun on the western horizon, I will sit on the deck eating popcorn and drinking a recovery beer with family. Sunset is at 9:08p.m., but it won’t get dark until 9:45-10p.m. Must store as much Vitamin D as possible.

As a visitor you probably wouldn’t get it, you’d probably say, “Yeah sure, the weather, the trees, the water, they’re all nice, but really, no need to get all worked up about it.” To which I’d say, “I’m selling it short. I can’t do justice to the blessed light that gives me an unspeakable joy and sustains me through the dark.” At which point you’d just slowly back away not knowing what to make of me. Which I would understand and not hold against you. At all. 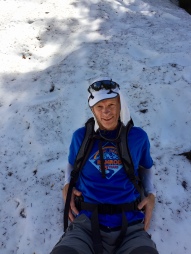 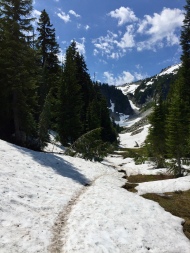 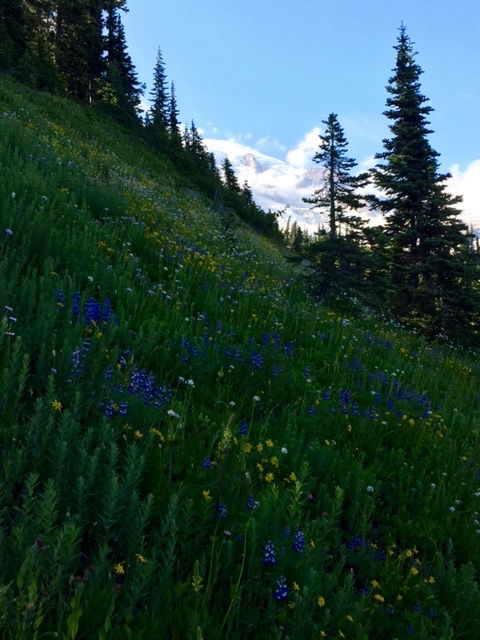 Thirty plus of us started at the North Rim at 7a.m. The group consisted mostly of Federal Highway administrator friends of Dan, Dan, the Transportation Man. Pre-trip, I asked him about the weather. He said he’d never seen a cloud on his previous three hikes.

Within the first 500 meters, lightening danced around us, hail fell from the sky, and we saw a dead mule covered with a tarp. The hail turned to light rain and we enjoyed cloud cover off and on throughout the day. The Canyon vets said it was about 25 degrees cooler than normal. I may have never made it if it was 100+.

Hiking the canyon is an enigma, your spirit is lifted while your body is punished. I had my bike computer in my pocket, but its global positioning system was cutting in and out meaning the mileage was off, but the first half descent of 6,600′ seemed spot on. The toughest point for me was the middle because as I descended my lower back got progressively tighter to the point where I thought it was going to completely seize up.

There are no rescues in the Canyon, once you drop in, you’re committed to the full meal deal. I took some comfort in the fact that I was among the first few hikers in our group meaning if my back completely gave out, people would find me on the trail and provide a proper burial. I also rolled my ankle at one point, took a wrong turn, did some ill-advised bushwhacking that added distance, and nearly ran out of water before lunch at Phantom Ranch.

I was not hiking particularly quickly, but I spent the first half of the day enjoying wonderfully long stretches without stopping for more than a few seconds for a picture or water. I reached the South Rim at 6:15p and guess that I was moving for about 9:45 of that 11:15. I enjoyed a longer lunch than normal, about an hour, because Dan and others rolled in just as I was beginning to feel semi-normal.

I used the additional time to stretch my back. The ascent was unrelenting and damn steep. I was conscious of how uniquely beautiful my surroundings were about 75% of the time. The rest of the time, I was so shelled that all I could do was focus on the next twenty meters.

There’s something wonderfully primitive about walking long distances. Maybe because it has been the dominant mode of transportation for the vast majority of world history. I dig my carbon fiber bicycle, but it doesn’t connect me to the ancient past in the way that walking long distances does. And in the Grand Canyon the ancient past is in stereo because your constantly surrounded by unrivaled geologic wonders.

Thanks be to God for the health to walk into and up out of the grandest of canyons. 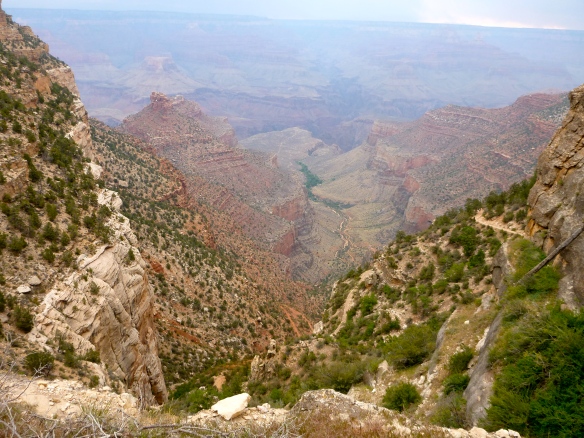 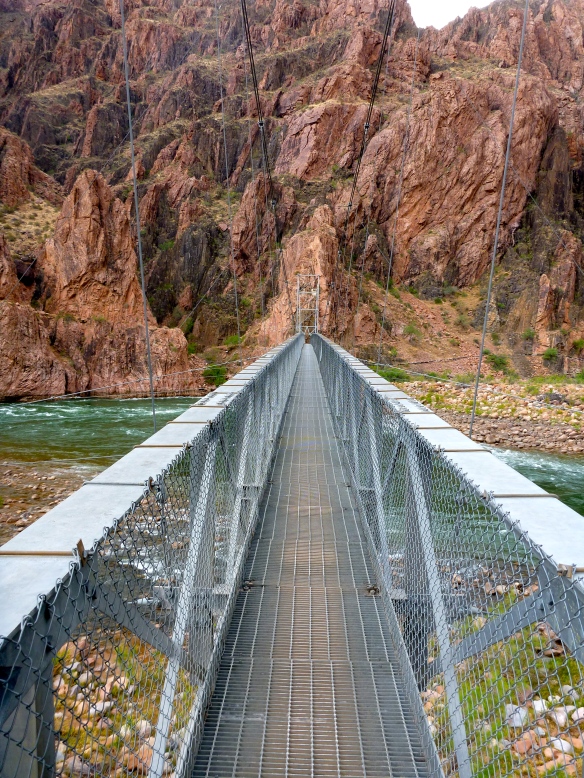 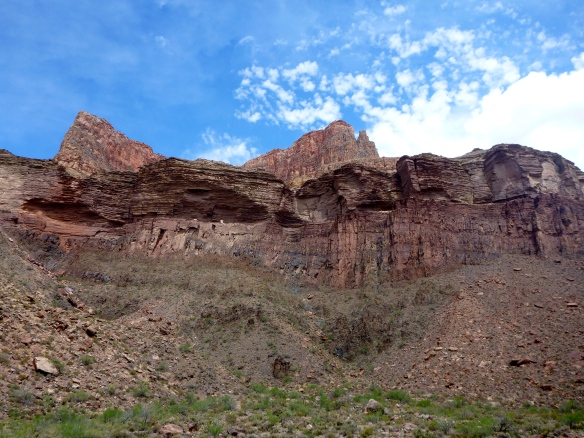