You’re a huge cycling fan. Can’t get enough of the Tour de France. Like most professional cycling fans, you wonder what kind of convos the riders in the peloton have with one another. I’m happy to provide a little flavor flav from today’s stage.

Ron Roglic: On the way to the start today I almost got hit by a guy in a big truck with a bumper sticker that said, “We The People. . . are pissed.”

RR: Haha. Shit, don’t take your anger, or more likely victimhood, out on me.

This morning I asked the GalPal if she wanted to say anything on behalf of her candidacy for 2021 Sportsperson of the Year. But instead of touting her 2021 athletic greatest hits, she declined, saying, “I’m not into competition anymore.”

How ironic because that’s exactly what this year’s winner says in the middle of this short documentary about what I’m deeming 2021’s Athletic Accomplishment of the Year.

I present to you, the 2021 Sportsperson of the Year, Lachlan Morton and the 2021 Athletic Accomplishment of the Year, The Alt Tour.

What is there not to love about Morton? Among other attributes that tipped the scale his way was his self-awareness, his social conscience, his sense of humor, his commitment to fun, and his utter lack of ego.

Sportsperson of the Year honorable mention goes to two athletes who, like Lachy, also inspire lots of other people without much media coverage at all (not counting Strava and Insta).

Dan, Dan, the Former Transportation Man for sticking like velcro for another year to the Boon Running Team, of which I am a proud member, despite giving up 2-13 years to the youngish, handsome “legends in their own minds” that make up the team. #nails

The best of the rest: Tom Brady.

Bernal, Columbia’s first Tour de France winner, and at 22 years old, the youngest rider in the race, seems to be Armstrong’s opposite in every way. Granted, variety is the spice of life, but I’ll take Bernal’s soft spoken, low key humility to Armstrong’s angry brashness every day of the week. Here’s hoping fame doesn’t change him too much.

The Open Championship is over. Final rest day at the Tour de France.

The Open Championship is the best golf tournament in the world. Way more inclusive than the other three majors. Way more authentic than the Masters. I love seeing the players sporting winter hats, with the sideways rain, playing from hellish pot bunkers and gorse. Port Rush Ireland is one of the more beautiful settings for golf I’ve ever seen. It boggles my mind that fewer than 2m people live in North Ireland and 237,000 watched the Championship live.

Irish passion for golf was evident in Rory’s Friday charge, all the Irish player’s comments, and Lowry’s 63 on Saturday. Professional golf doesn’t get any better than that. Only wish I had been there.

And the outcome of le Tour is still up in the air after two weeks. Given the weakness of his team, I do not think 2 minutes is enough of a cushion for Alaphilippe. Of course, we’ll probably have to wait 8 years to determine the winner.

Thanks to this movie preview, which gave me an Open Championship like jolt of joy, I think I’ll be okay today.

2. Excellent pictures of the Tour de France in case you missed it. Even if you followed it, check out the second image.

3. The New York Times is struggling mightily to reinvent itself.

“As one editor put it, ‘The mood at the paper is poisonous in a way I’ve never seen it in the past 15 years.'”

4. The Good Wife, while starring at Peralta Junior High School in Orange, CA, once scored a basket in the opposing team’s hoop. Here’s hoping this makes her feel better.

5. Are helicopter parents ruining summer camp? Sadly, dear readers, this is a rhetorical question. Best not to read if you already have high blood pressure.

When a person’s image and/or reputation is inflated, sometimes people lament, “Big hat, no cattle.” A lot of people today, like the President of the United States, excel at promoting themselves more than anything else. Thanks to the public’s allegiance to valueless media, we’re making a mockery of merit.

A case study. My July morning routine entails working out, eating breakfast, making a green tea latte, and then settling in to the day’s Tour de France stage which I spend about thirty minutes fast forwarding through.

This year there are three cyclists from the U.S. in le Tour, meaning about 1.5% of the total peloton. One of the U.S. riders is barely surviving the mountain climbs, just making the maximum time cuts. But because we’re living in the Age of Self Promotion, that same rider is starring on the U.S. television coverage, dropping daily broh-heavy “behind the scenes” video segments that add nothing to the event. He seems likable enough because of a goofy personality. And maybe the fact that both of his parents were professional cyclists and he’s bounced back from a horrific accident a few years ago contribute to some of his faux-fame as well.

But even accounting for those extenuating circumstances, the fact that he’s in damn near last place would only matter if we were in an Age of Meritocracy, but we’re not. Increasingly, we’re surrounded by people with really, really big hats. Which makes it tough to see the front of the race.

1. Given Kathryn Schulz’s prodigious talent, the New Yorker’s future is bright. As frightening and superbly written as anything I’ve read in a long time. The Really Big One. Subtitle—An earthquake will destroy a sizable portion of the coastal Northwest. The question is when. Made me want to buy in Bend, Oregon.

“If we take this research at face value, we learn a few things. First, some exercise reduces your risk of death. Second, the optimal walking/jogging exercise is light to moderate jogging. The optimal speed is between 5 and 7 mph, and if you do 25 minutes about three times a week, you’re all set. Nothing in the data suggests that running more — farther, or faster — will do more to lower your risk of death.”

3. From the Wall Street Journal, The Sane Way to Cycle Competitively.

4. Pathetic to the point of sad. From LetsRun.com, Lehigh Valley Got it Wrong: The Evidence is Conclusive: Mike Rossi—The Viral Boston Marathon Dad—Is A Marathon Cheat And Should Never Have Been On The Starting Line in Boston.

Never settle it with a time trial. Well, unless you’re willing to tweak it.

Brilliant job drawing me in with three straight weeks of intense racing, minimal discussion of drugs (I’m choosing to ignore the race speeds), relentless climbs, beautiful scenery, whacked out fans, attacks, and the emergence of several exciting young riders including one from Big Sky country.

Like watching the fourth quarter of an NBA game, my normal routine was to forward the Tivo to the final 20k after an early morning run or swim.

Finally a Tour with some suspense.

Then deciding it with a 42k Time Trial?! After three weeks of watching guys throw down against the elements, the geography, and one another, let’s all stare at our wrist watches. Boring. As. Hell.

Without a rider like me out there as a frame of reference (“Byrnes is 9 minutes down at the first time check”), it’s impossible to appreciate how fast they’re going. And because they race individually, it’s like watching 19 separate Kentucky Derbies. Or 12 separate 100 meter Olympic runs. I know, what if in London we have Phelps swim, and then Lochte a few hours later?! Or at the next heavy weight fight, why don’t we just measure the respective force of each combatants’ punches (against a bag) and then tally up the results. Riveting stuff.

Easy to fix and happy to help.

Instead of sending Andy Schleck three minutes after Cadel Evans, send him 57 seconds before him (his advantage at the start of the stage). That way there’s the potential to see Cadel gradually close the gap, or in actuality, not so gradually. Imagine how cool it would have been to see Cadel reel Andy in within the first third or half of the ride. I would have loved seeing him let Andy dangle, dangle, dangle, until deciding now is the time to CRUSH him.

Even better. As Cadel closes in, Phil and Paul go completely silent as the theme from Jaws starts playing softly, then progressively louder. At the same time, all the fans lining the course make the universal shark sign right before the pass. 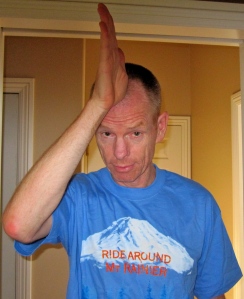 Or like in baseball, let each racer pick their “pass song”. Again, 30 seconds before the pass P&P go silent and the tune slowly builds to full force. I’ve thought long and hard about my “pass song” and I’m going with Busta Rhymes, Lil Wayne, and Chris Brown. . . Look at Me Now.

And yes, Monday will be more tolerable thanks to my 2011 RAMROP (Ride Around Mount Ranier In One Piece) report.

We’re greatly influenced by—sometimes positively, sometimes negatively—those we associate closest with in our work lives and our private lives.

From that point forward, anyone with Hamilton’s and Armstrong’s physical tools and off the charts competitive drive probably had very little problem rationalizing it with the same mindset that regularly trips up thousands of young people every year, “Everyone’s doing it.”

It’s the same phenomenon we sometimes see on the freeway when it’s turned into a parking lot as a result of a bad accident. One person eventually decides the risk-reward is worth it, so they pull out from the far right lane onto the shoulder and take off into the horizon. Then, a second person. Then, a third. I can either sit and reflect on my moral superiority or get home at the same time as them, but not both.

Given the work culture of his chosen profession, I almost find Armstrong a sympathetic figure. To have “just said no” he would have either had to have found something else to do with his life or settle in as a second-tier domestique stuffing water bottles down his back.

Almost a sympathetic figure because through his repeated, robotic denials, he wants everyone to believe he’s special. He’s the only one who stayed in his lane, but somehow still arrived home before everyone else. That’s how good he was.

It’s as this point, Armstrong turns into a fascinating psychological case study. In one respect, we’re all Lance Armstrong in the sense that everyone one of us maintains public personas, revealing less than the truth about ourselves to the larger world. Of course the difference with Lance is the degree of duplicity.

He must wake up at night worried about what the federal grand jury’s findings might do to his athletic legacy, his future marketing potential and income, and donations to his foundation.

I hope I’m wrong, but I don’t ever expect him to come clean, just doesn’t seem he’s nearly introspective enough. And that’s too bad, because I’d gain some respect for him if he did. Of course, my acceptance and approval are meaningless compared to the rewards of self acceptance.